You are here: Home1 / Individuals2 / Addiction3 / Addiction & the Brain

(Note: The word “drug” refers to any substance that is commonly abused, including alcohol.)

Today’s professionals in the fields of medicine, mental health, and addiction treatment accept the disease model of addiction. According to this model, addiction is conceptualized in the following terms:

For over three decades, scientific research has continued to demonstrate that addiction is a disease of the brain. We still do not fully understand the exact mechanisms of how addiction affects this extraordinarily complex organ. As our technology advances, research will continue to refine our knowledge and use it to improve addiction treatment. What we do know today can fill many pages. Addiction happens through hundreds of changes in the complex architecture and processes of the brain. The information below is an overview rather than an exhaustive discussion of each topic.

The two topics of interest to the process of addiction are the brain’s communication system and the reward circuit.

Drugs and the Brain’s Communication System 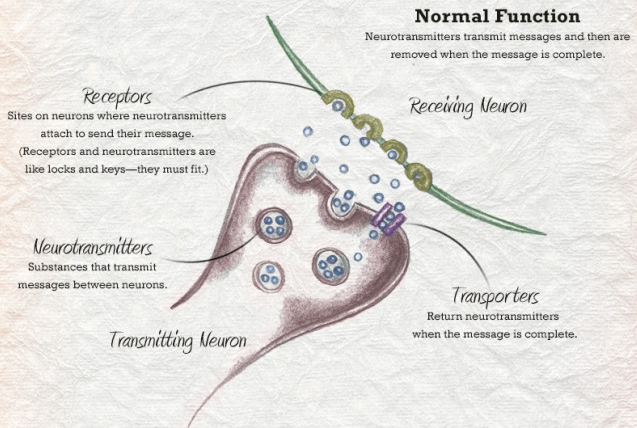 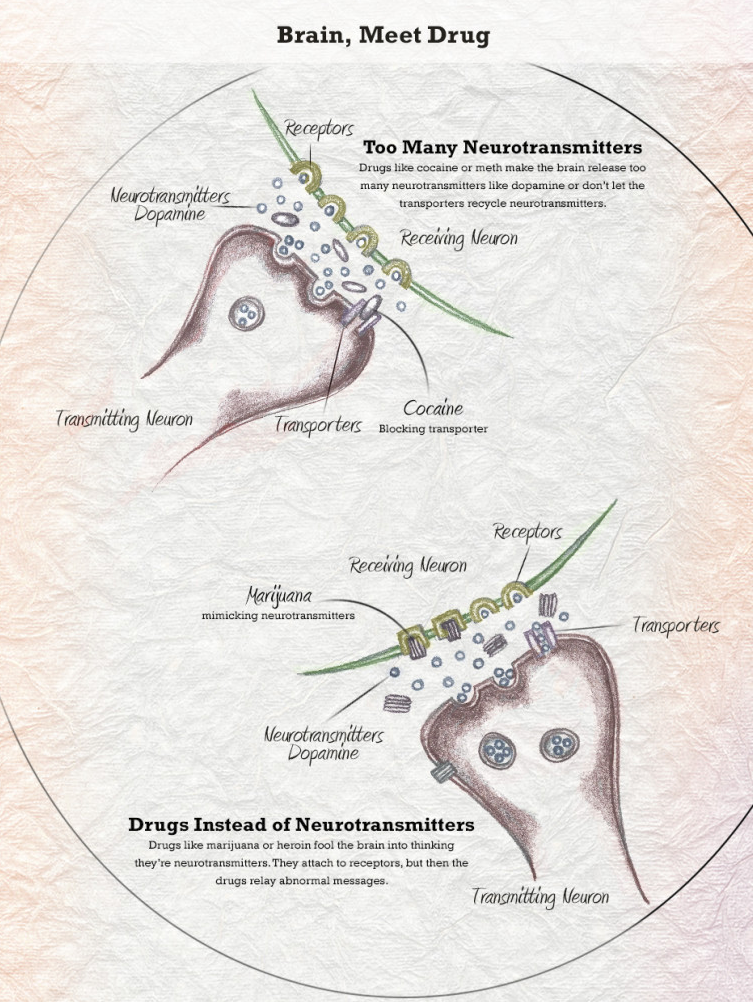 The image below gives examples of the disruption caused by heroin, methamphetamine, and cocaine. 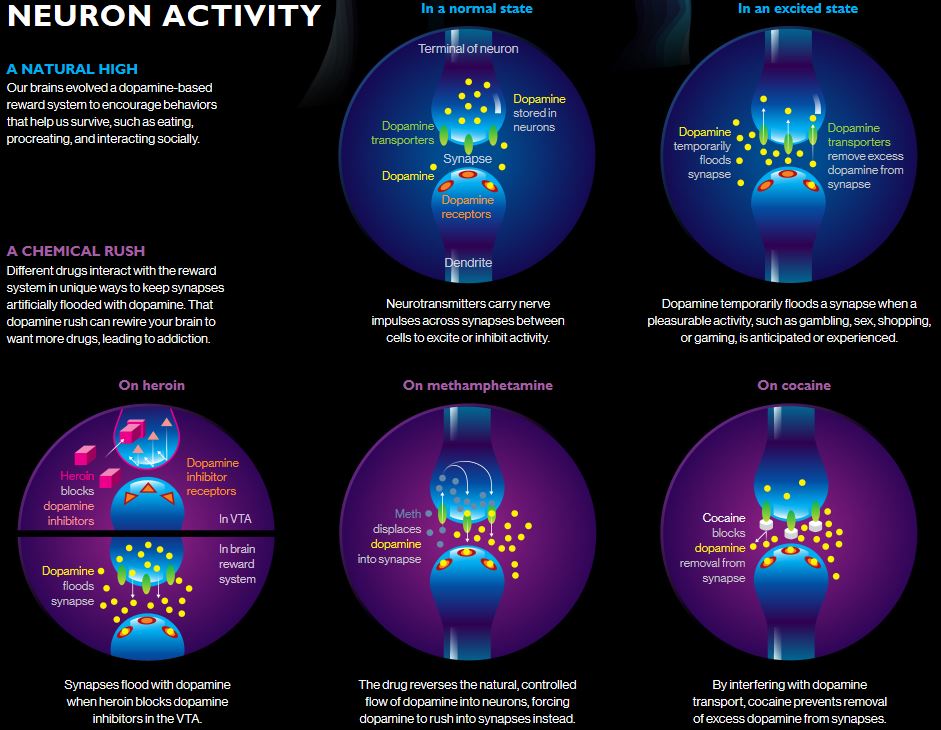 Drugs and the Brain’s Reward Circuit
The brain’s reward circuit is an intricate pathway that is involved in pleasure, motivation, and memory. As with all other brain research, scientists are continuing to refine our knowledge of the circuit’s components and functioning.

Before delving into the mechanics of the reward circuit, two points should be made about its nature and origins.

First, it is an old part of the brain whose initial function was to contribute to our survival by reinforcing us to seek what we need (our rewards) to satisfy fundamental drives such as hunger, thirst, sex, and social interaction (for group benefits such as protection, food, and learning). In that sense, the reward circuit is akin to the more primitive parts of the brain, such as the brainstem and the cerebellum, that operate based on instinct and reflex (see the Neuropsychology-Brain and Anxiety section). In addition, the reward circuit is highly sensitized to the sights, scents, and sounds that alert us to the presence of the rewards. This is an example of the brain learning through association, which is a quality that works against us in addiction disease because it turns external and internal stimuli into powerful triggers.

Second, in modern humans the reward circuit is more about pleasurable activities (again, our rewards) than survival. A plethora of such activities exist today, but some simple examples are eating food that we like regardless of its nutritional value, listening to our favorite music, engaging in creative pursuits, playing games, or spending time with friends. 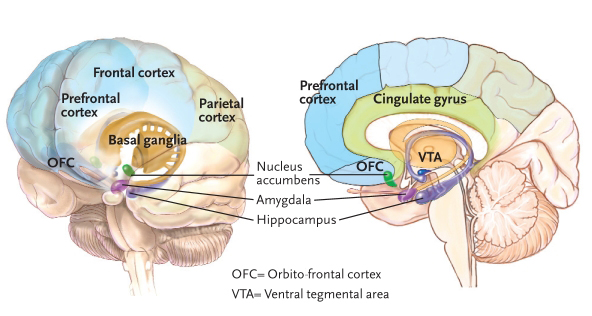 In general, the current consensus is that the most important reward circuit is the mesolimbic dopamine system, which is part of a series of parallel pathways. Its structures include parts of the basal ganglia (e.g., the ventral tegmental area [VTA] and the nucleus accumbens), the amygdala, and the hippocampus.

The pathway begins with the production of dopamine in the VTA, continuing on to the nucleus accumbens and other parts of the basal ganglia. The activation influences the rest of the limbic system as well as other areas of the brain, such as those that process sensory and motor information, the prefrontal cortex (including the orbitofrontal cortex [OFC] which plays a role in decision making), and the cerebellum (attention and movement).

The amygdala’s role in the reward circuit has to do with conditioned learning because it establishes an association between environmental cues and the reward (important in drug craving). The hippocampus, which helps us form memories and learn, works in unison with the amygdala to establish memories of drug use (again, important in drug craving and subsequent relapse).

The amygdala also becomes important once addiction takes root. A region referred to as the extended amygdala—a set of anatomically continuous structures that includes the amygdala and some surrounding areas, including the bed nucleus of the stria terminalis (BNST)—acts as a “stress circuit” in the brain. This circuit plays a role in anxiety, irritability, and unease. Such negative feelings characterize withdrawal after the drug high fades, thus motivating the individual to seek the drug again. At some point, the drug is used to get temporary relief from this discomfort rather than to experience a high.

As mentioned above, the pathways of the reward circuit extend to the prefrontal cortex (PFC), which is our “thinking brain” and the seat of higher-order functions such as decision making (OFC), planning, judgment, and self-regulation (including impulse and emotion control). Since the PFC does not fully mature until we are about 25 years old, the brains of adolescents are particularly susceptible to possible long-term negative effects of substance use disorders. As the balance of influence shifts between the PFC and the reward and stress circuits, the addicted individual seeks the drug compulsively with greatly reduced impulse control abilities.

A healthy reward circuit always has a moderate amount of dopamine in the synaptic space. This is true regardless of whether an activation just occurred due to the presence of a rewarding stimulus (healthy or drug-related). It is also important to note that cell communication exists not only within the circuit, but also between its structures and other regions in the brain. Collectively, these various areas operate in a highly interrelated manner and affect each other’s functioning in different ways and at different levels.

In a normal situation, an activated reward circuit releases small bursts of the neurotransmitter dopamine. The process is meant to reinforce our behavior, that is, increase the odds that we are going to repeat the activities that produce pleasure. [This current scientific explanation of reward circuitry is slightly different from prior theories, which viewed neurotransmitters—dopamine in particular—as directly producing pleasure, rather than acting as reinforcement agents.] The activation of the reward pathway also signals the memory centers in the brain that something important is happening and needs to be remembered. In addition, changes occur in neural connectivity that make it easier for us to repeat the rewarding activity without having to think about it, which leads to the formation of habits. 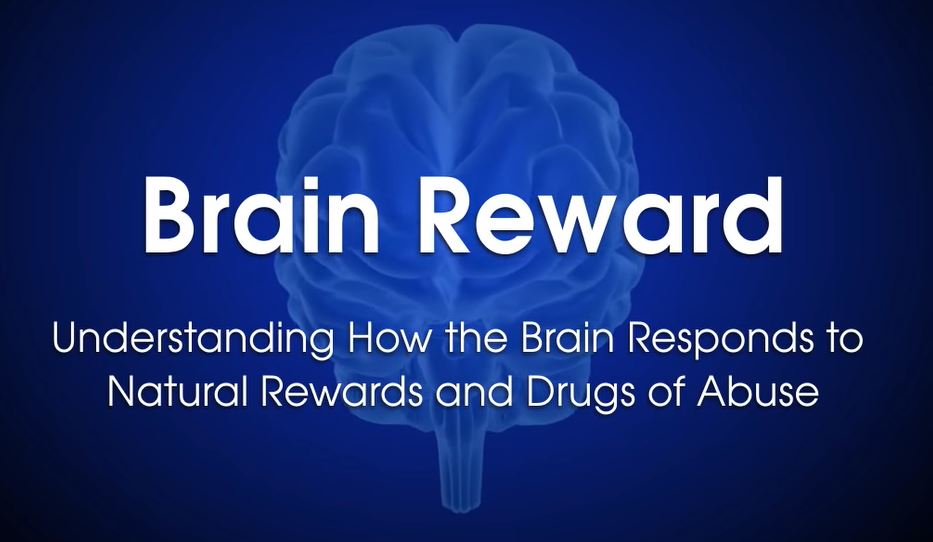 Addictive substances cause the reward circuit to become artificially flooded with large amounts of dopamine. You can see this process in a highly informative 9-minute video produced by the Office of Science Policy and Communications, National Institute on Drug Abuse/National Institutes of Health, in collaboration with Synergy Enterprises, Inc. The title of the video is Brain Reward: Understanding How the Brain Responds to Natural Rewards and Drugs of Abuse. Link: https://www.youtube.com/watch?v=7VUlKP4LDyQ

A long-term consequence of the repeated stimulation of the reward circuit by drugs is the change in the brain’s natural dopamine levels. The brain responds by producing less dopamine, or by reducing the number of dopamine receptors that can receive signals. When this happens, the ability to experience pleasure from other activities is greatly reduced. Eventually, the addicted individual feels unmotivated, lifeless, emotionally flat, depressed, and unable to enjoy things that were previously pleasurable. Instead, the person needs to keep taking drugs just to feel a normal level of reward. In addition, at some point the individual will need to take larger amounts of the drug to experience the high, which is known as tolerance. All of these elements combine to cause a vicious cycle that makes it difficult to stop taking the drug.

Addiction Cycle and the Brain: An Example with AUD

The neurocircuitry schematic below shows how addiction can involve multiple brain areas at every step. Illustrated is a general three-stage cycle of Alcohol Use Disorder (AUD). There may be some variation as to how someone progresses through the cycle, the intensity of the experience, and the specifics of the disruptions to the brain circuits.

The binge/intoxication stage is marked by a loss of control over alcohol intake and by the brain’s reward system being trained to need increasing levels of alcohol. The brain structures primarily involved in this stage (marked in blue) are the nucleus accumbens (NAc) and the dorsal striatum (DS) within the brain’s basal ganglia. Both are part of the brain’s reward circuit, with the DS responsible for habit formation and perseveration. As the NAc is repeatedly activated by alcohol, the changes in the DS lead to the development of compulsive alcohol seeking. Since the brain works in part by association, the elements of the drinking experience—whether it’s other people, places, or internal mood states—become associated with the rewarding effects of alcohol, thus turning those elements into triggers or cues that activate the brain’s reward circuit even in the absence of alcohol. Being triggered by such stimuli causes the intense craving or desire for alcohol. This process of associative learning is also called incentive salience.

The withdrawal/negative affect stage occurs when the absence of alcohol (1) causes a deficit state in the reward circuit (due to having become conditioned to the effects of alcohol), (2) activates a stress state in the brain’s extended amygdala (aka the “stress circuit”), and (3) dysregulates the activity of neurotransmitters that counter stress. The combination of these effects contributes to the feelings of unease, anxiety, and irritability that typically accompany alcohol withdrawal. The brain structures primarily involved in this stage (marked in red) are once again the NAc, as well as the extended amygdala consisting of the bed nucleus of the stria terminalis (BNST) and the central nucleus of the amygdala (CeA). As mentioned above, the extended amygdala acts as the brain’s stress circuit.

The preoccupation/anticipation stage of AUD disrupts the prefrontal cortex (PFC). The center of our conscious thought, the PFC manages functions that make us distinctly human. As indicated above, the reward pathways extend to the PFC. With repeated drug use, the reward and stress circuits become more influential, while the functions of the PFC are reduced. This leads to deficits in executive function & self-regulation, including impulse control/behavioral inhibition, thinking through the consequences of behavior, logic, problem-solving, decision-making, and multitasking.

Depending on the duration and severity of AUD, the neurological changes that occur because of it may persist after an individual stops actively drinking, thus contributing to the chronic nature of this disease.