Key Features. People with this disorder experience excessive fear or anxiety of social situations in which there is a possibility (real or perceived) of humiliation, embarrassment, or rejection. Although the official diagnostic criteria focus on several cognitive symptoms and one behavioral symptom (avoidance of social situations), it is also common to experience physical symptoms (illustrated in the infographic, below). 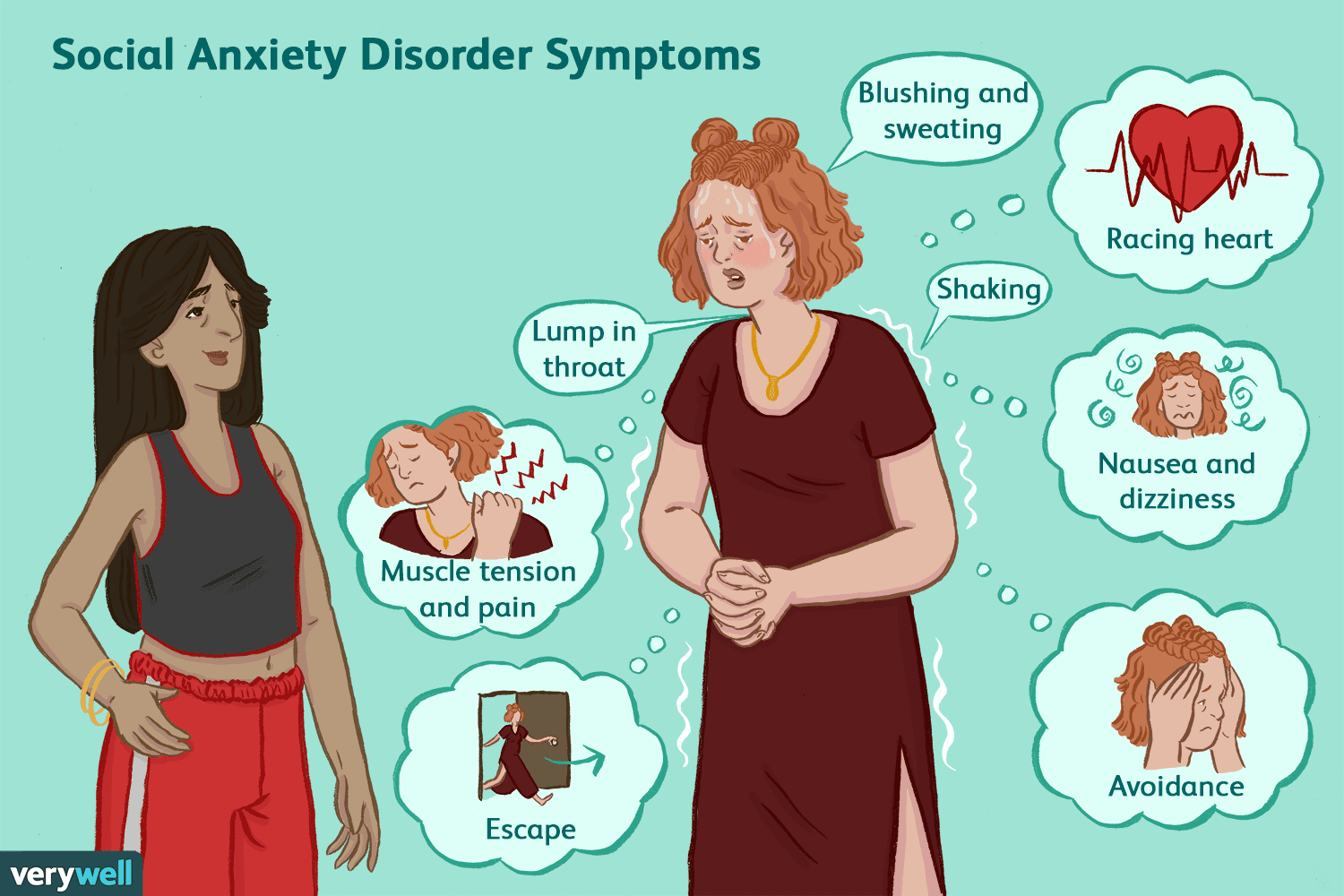 Prevalence. The 12-month prevalence is approximately 7%. Children and adolescents have rates similar to those of adults. Prevalence rates have been found to decrease with age. Females are about twice as likely as males to be affected.

Diagnostic Criteria. If you have been experiencing the following symptoms for at least 6 months, you may be suffering from Social Anxiety Disorder:

Associated Features. Although the diagnosis should be made only if the official diagnostic criteria are met, the DSM-5 also lists associated features.

Key Features. Excessive anxiety and worry across a number of situations. Physical symptoms are also common. 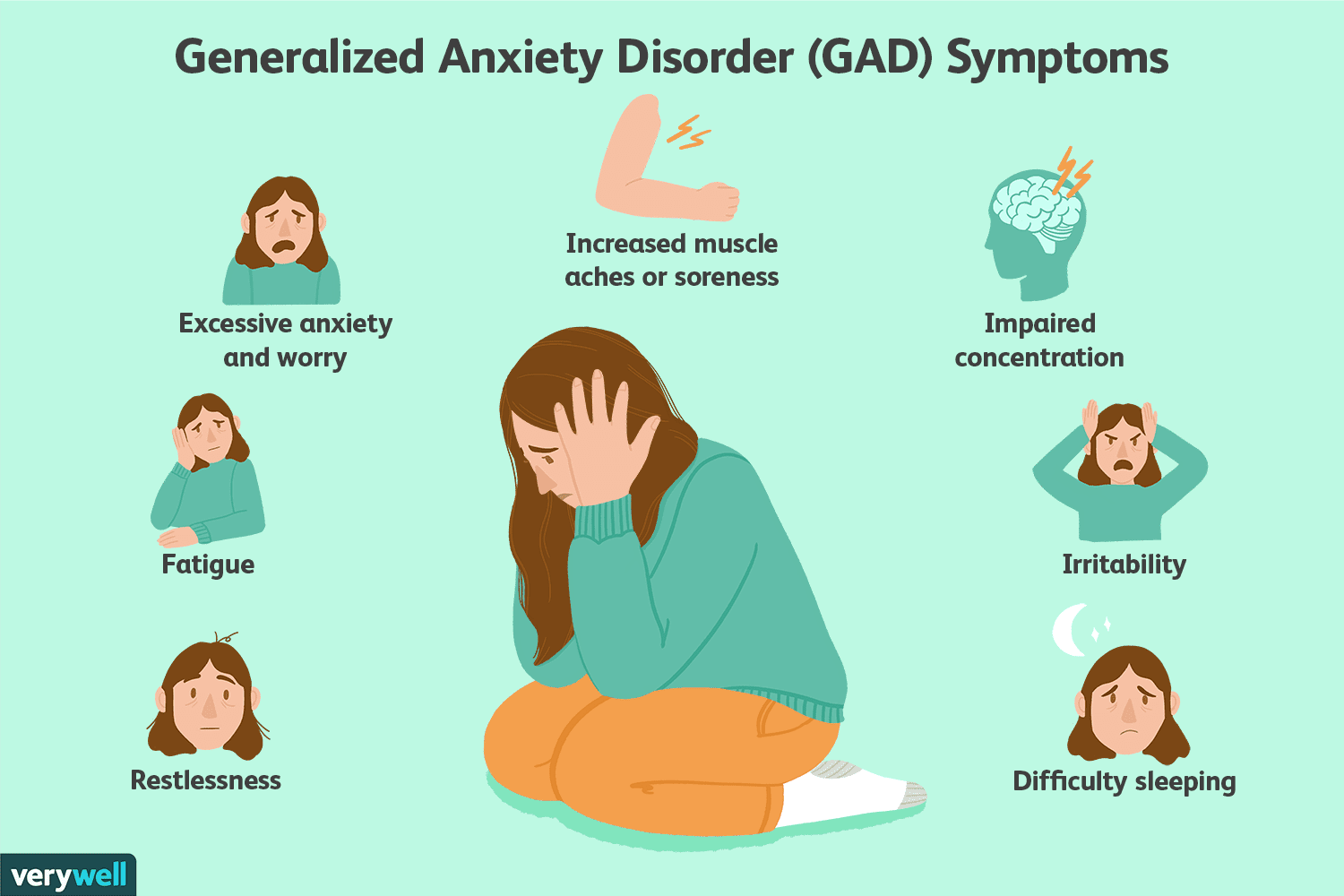 Prevalence. The 12-month prevalence is approximately 2.9% among adults and 0.9% among adolescents. The prevalence peaks in middle age and declines in later years. Females are twice as likely as males to be affected.

How GAD Differs From Nonclinical Anxiety & Worry. Since almost everyone has been anxious or worried about something at one time or another, what makes GAD different?

First, GAD worries are excessive, perceived as unmanageable in the long term, and interfere significantly with overall functioning.

Third, GAD is much more likely to cause physical symptoms, as seen below in the diagnostic criterion #3 (a, b, and e). In addition, there may be muscle aches or soreness, trembling, twitching, and feeling shaky. Many individuals with GAD also experience sweating, nausea, diarrhea, IBS, headaches, and an exaggerated startle response.

Fourth, GAD causes moderate to severe disability. In the U.S., the diagnosis of GAD accounts for 110 million disability days per year. GAD impairs one’s ability to do things quickly and efficiently, whether at home or at work. It takes time and energy away from tasks and life in general. For parents with GAD, it has been found that excessive worrying may keep them from encouraging confidence in their children.

Diagnostic Criteria. If you have been experiencing the following symptoms for at least 6 months (more days than not), you may be suffering from GAD:

Development & Course. Although the median age of onset for GAD is 30 years, which is later than for other anxiety disorders, the onset can occur significantly earlier or later than the median. GAD tends to be chronic and waxes and wanes across the lifespan, fluctuating between clinical and subclinical. The main difference across age groups is in the content of worry (e.g., children and teens tend to worry more about school and athletic performance).

It is rare for someone who suffers from GAD to become completely symptom free. In addition, those with GAD are likely to have other anxiety disorders at one time or another, as well as unipolar depression.

Key Features. Recurrent and unexpected panic attacks. The frequency and severity of such attacks vary widely. The symptoms are both physical and cognitive.

Prevalence. The 12-month prevalence is approximately 2%-3% in adults and adolescents (for children, it is less than 0.4%). Females are twice as likely as males to be affected. The rates gradually increase during adolescence, particularly in females, peak during adulthood, and then decline in older age.

Diagnostic Criteria. If you have been experiencing the following physical and cognitive symptoms, you may be suffering from Panic Disorder:

Frequency. It is possible to have one attack per week for months at a time, or short bursts of daily attacks separated by weeks or months without any attacks or with less frequent attacks (e.g., two per month) over many years.

Severity. It is possible to have both full-symptom (4 or more) and limited-symptom (fewer than 4) attacks. The number and type of panic attack symptoms frequently differ from one panic attack to the next.

Risk Factors for each disorder are presented below, in the form of an overview table, since some of the factors appear in more than one anxiety disorder.

*Neuroticism refers to one of the personality traits included in the Five-Factor Model, which is the most widely accepted theory of personality to date.

NOTE: Up until the publication of the DSM-5 in 2013, the DSM-IV-TR classification of Anxiety Disorders included several more disorders, among them PTSD and Acute Stress Disorder. In the DSM-5, these two disorders are now categorized under Trauma- and Stressor-Related Disorders. Anxiety and fear remain important features of this group of disorders. However, the authors of the DSM-5 recognized that the predominant symptoms in some individuals exposed to a traumatic or highly stressful event are not anxiety-based. Instead, they experience symptoms that have more to do with dysphoria, externalized aggression, dissociation, or anhedonia (an overall inability to experience pleasure from or have interest in previously enjoyed activities).