You are here: Home1 / Individuals2 / Anxiety

What is an anxiety disorder?

First, let’s define anxiety. The word is often used to connote several different emotional states such as fear, worry, and stress. It can be said that these terms overlap, but technically they are not interchangeable.

Anxiety is the apprehensive anticipation of future threat or misfortune. It is associated with vigilance and cautious or avoidant behaviors.

Fear is the emotional response to real or perceived imminent threat. Compared to anxiety, it is more closely associated with our instinctual fight-flight-freeze response and escape behaviors.

Worry refers to unpleasant thoughts about a specific topic that could be important or trivial. These uncomfortable thoughts are difficult to control and are persistent and repetitive.

Stress refers to a pattern of unhealthy physiological, cognitive, emotional, and behavioral responses in the brain and in the body to certain events or situations. Over time, such responses tax or exceed our ability to cope.

In the section on specific anxiety disorders, you will see that fear and worry are included as criteria for some of the disorders.

Occasional anxiety happens to just about everyone; it is an expected part of life. Such anxiety is temporary and generally does not have a long-term negative effect on our functioning.

Conversely, an anxiety disorder persists, can get worse over time, and causes significant impairment in social, academic, relational, occupational, or other important areas of functioning.

Anxiety is the most common complaint for which people seek individual psychotherapy. According to the National Institute of Mental Health (NIMH), 19% of adults in the U.S. experience an anxiety disorder in one year, with the highest rate among those aged 30-44. Approximately 31% of adults will have an anxiety disorder at some point in their lives. Regarding severity, 43% report mild symptoms, 34% moderate, and 23% serious.

In the brain, there are two very different areas that give rise to anxiety: the cerebral cortex (commonly referred to as “the cortex”) and the amygdala (we actually have two amygdalae, one in each brain hemisphere, but the common usage is singular “the amygdala.”). While the cortex involves our thoughts and perceptions, the amygdala is the seat of our instinctual fight-flight-freeze survival response. Although anxiety can begin in the cortex or be magnified by our thoughts, the anxiety response cannot happen without the amygdala. This is why my treatment of anxiety addresses both brain pathways. 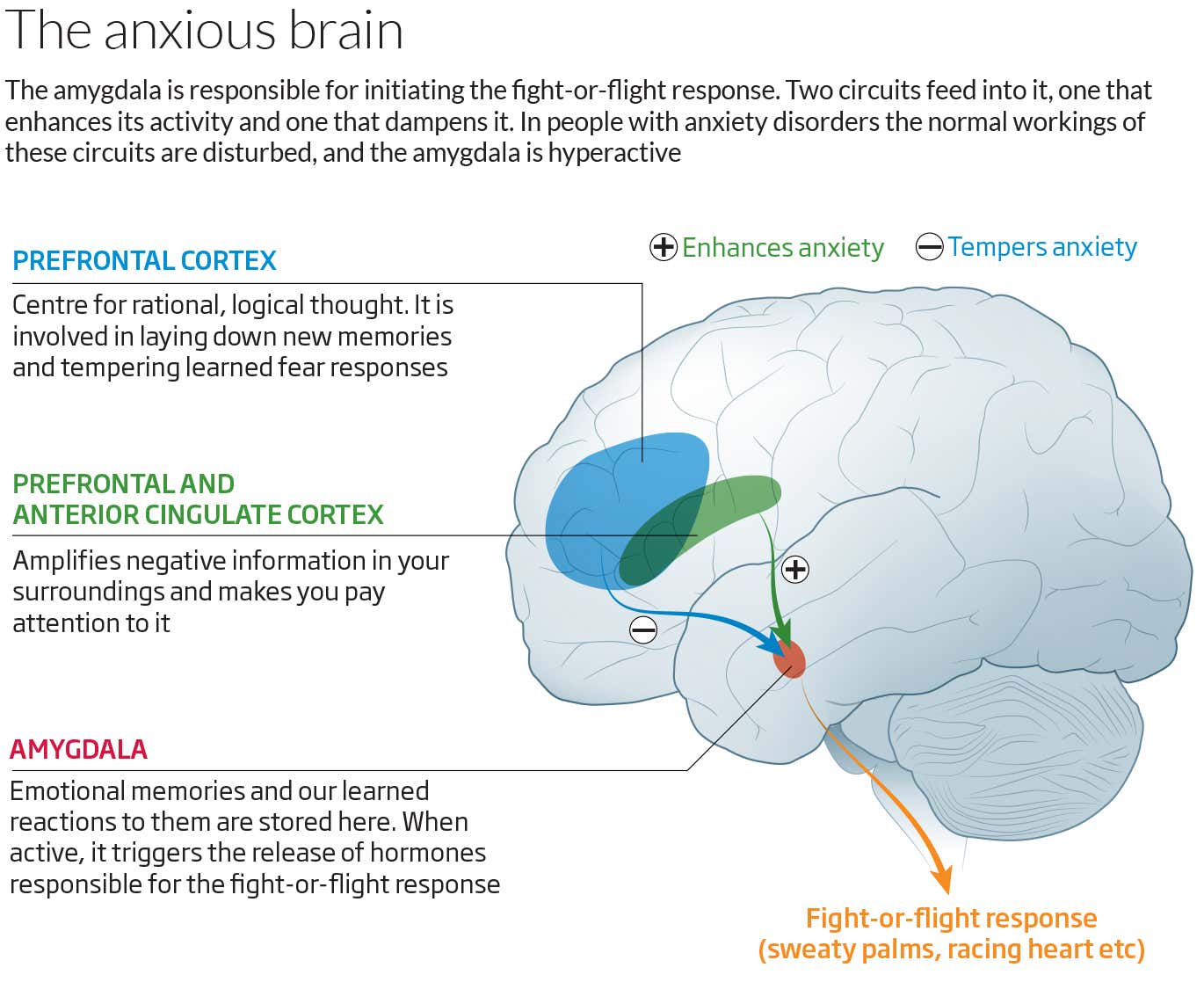 Note: This image does not show all brain structures involved in the two anxiety/trauma circuits.

Women are about twice as likely to develop an anxiety disorder. This is true for most anxiety disorders, including the three types discussed in some detail in a separate section.

Many anxiety disorders begin in childhood and tend to persist into adulthood if they are not treated early on. Typically, they peak during adulthood and subside in older age.

There are several types of anxiety disorders. The most common ones (based on the 12-month prevalence rates in the general population) are Specific Phobia (7%-9%), Social Anxiety Disorder (7%), Generalized Anxiety Disorder (2.9%), and Panic Disorder (2%-3%). I discuss the latter three in some detail, since those are the types I have encountered in my practice.

Additional anxiety disorders are Separation Anxiety Disorder (adults at 0.9%-1.9%; children at 4%; adolescents at 1.6%), Selective Mutism (no information from epidemiological studies, but clinic, school, and general population samples suggest a range between 0.03% and 1% in children), Agoraphobia (adolescents and adults at an estimated 1.7%), Substance/Medication-Induced Anxiety Disorder (the prevalence is unclear, but it is believed to be extremely rare in the general population and somewhat higher in clinical populations), and Anxiety Disorder Due to Another Medical Condition (the prevalence is unclear).

NOTE: Up until the publication of the DSM-5 in 2013, the DSM-IV-TR classification of Anxiety Disorders included several more disorders, among them PTSD and Acute Stress Disorder. In the DSM-5, these two disorders are now categorized under Trauma- and Stressor-Related Disorders. Anxiety and fear remain important features of this group of disorders. However, the authors of the DSM-5 recognized that the predominant symptoms in some individuals exposed to a traumatic or highly stressful event are not anxiety-based. Instead, they experience symptoms that have more to do with dysphoria, externalized aggression, dissociation, or anhedonia (an overall inability to experience pleasure from or have interest in previously enjoyed activities).